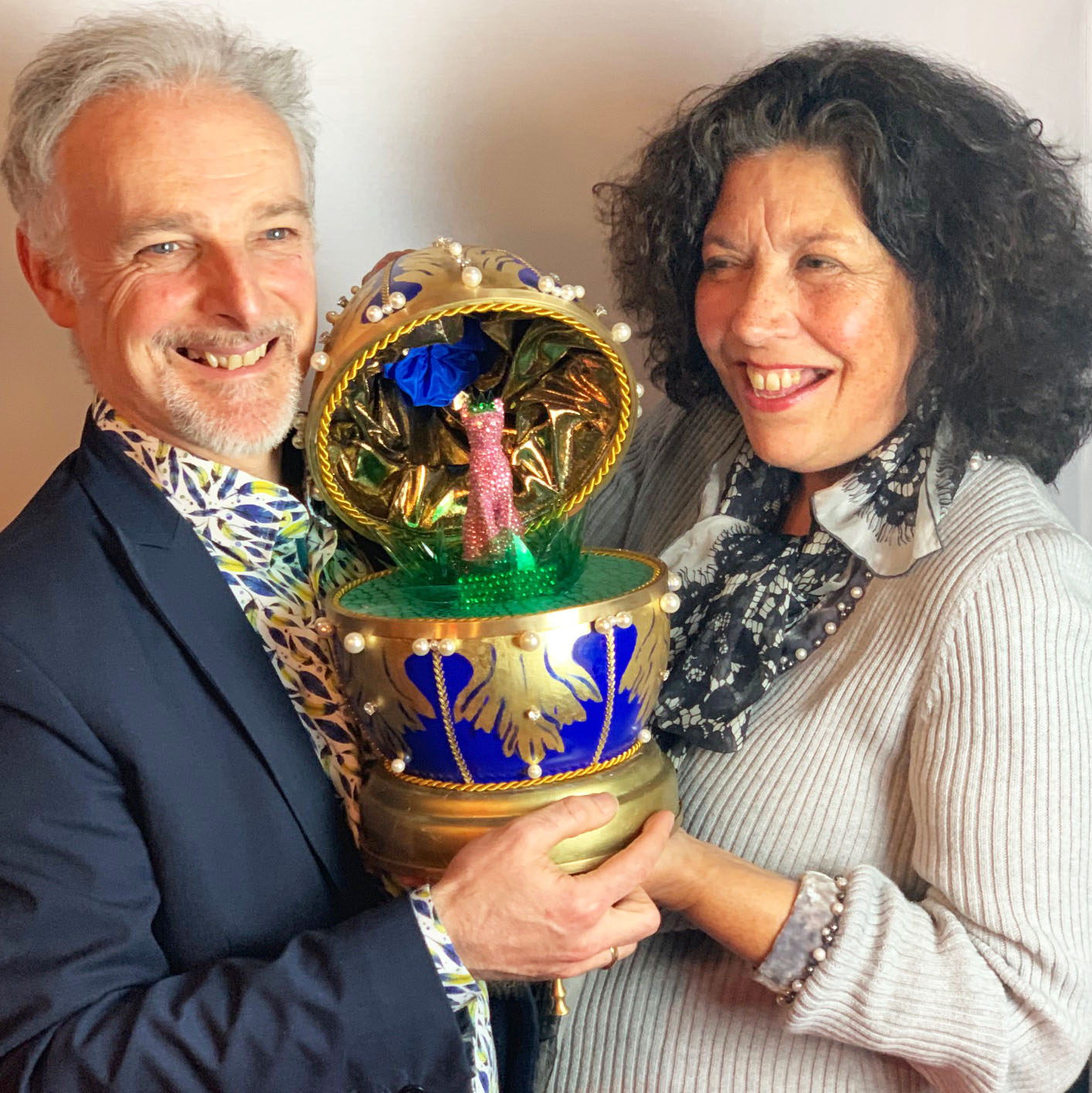 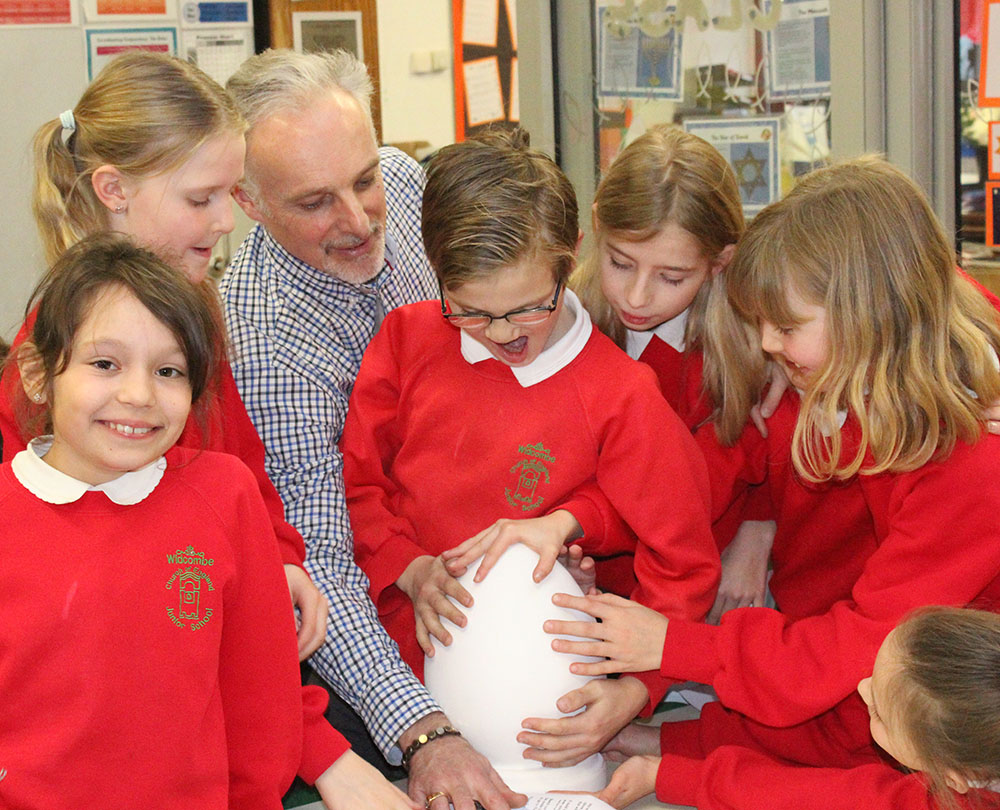 The annual Great Big Egg Hunt, arranged by Bath’s Egg Theatre, returned this year with a brand new batch of big ‘blank-canvas’ white eggs begging for some artistic designs. Some of Bath’s best and most community orientated local businesses joined in this year, including Nicholas Wylde, who sponsored the campaign and decided to collaborate with a local school’s year 5 & 6’s art club at Widcombe Juniors .

Pictured here, Nicholas came by with the blank egg and a simple ‘brief’, created so that it might resemble a brief they might receive when they became the artists and designers they dreamt of becoming! “They were very, very excited” Nicholas told us later, “It was great fun, bouncing their initial ideas around the classroom”. 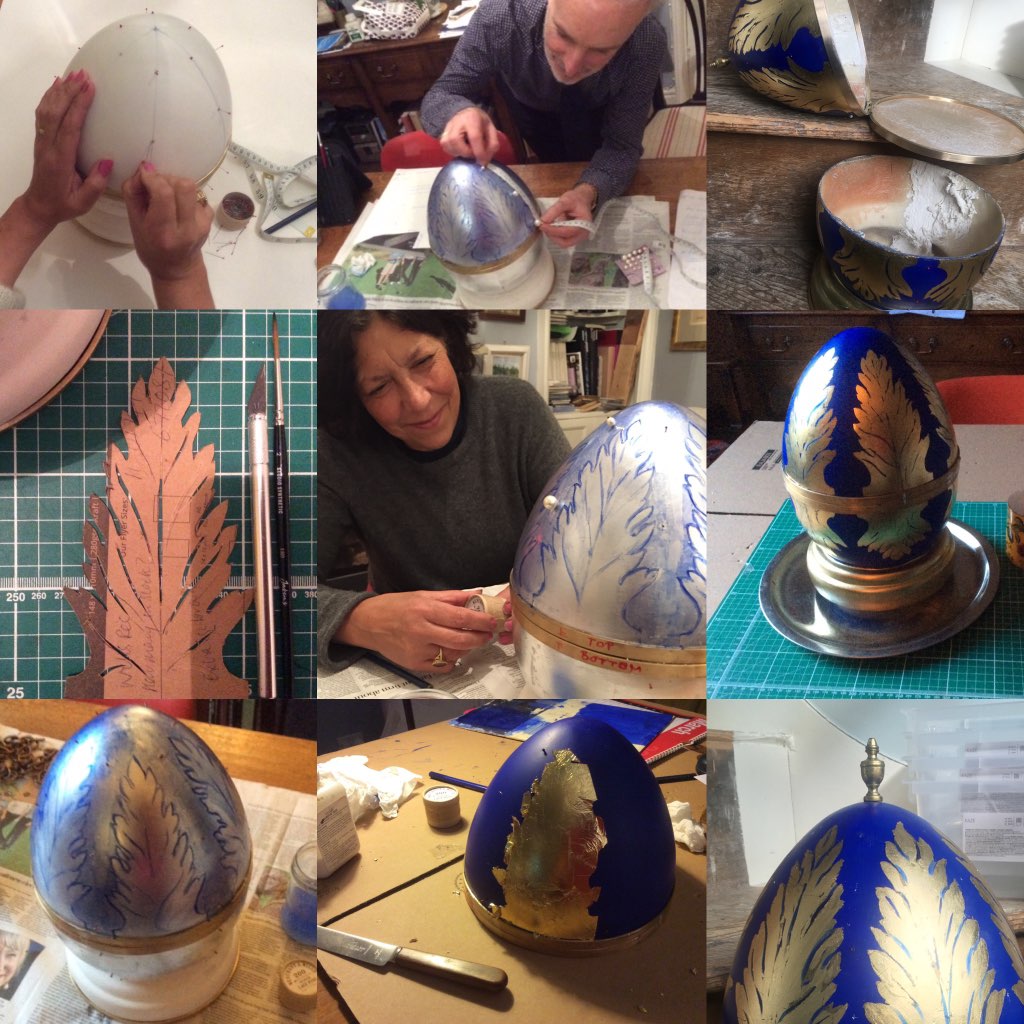 Following his visit, Nicholas contacted the fantastic Jane Knapp, a local artist who he knows personally (& that you can read more about here), to collaborate with for the outside of the Wylde egg. They ambitiously decided to opt for a faberge style egg, which would mean cutting it open, and creating a metal frame, as well as many other challenges.

Collectively, Wylde and Knapp drew up the design, marked out the placement of pearls and stones, cut stencils, sawed the egg in half, covered it with multiple layers of paint and other coatings, as well as creating a fully functioning brass frame, with all it’s hinges and fixtures, and generally just came up with the most fabulous faberge style egg you ever did see! 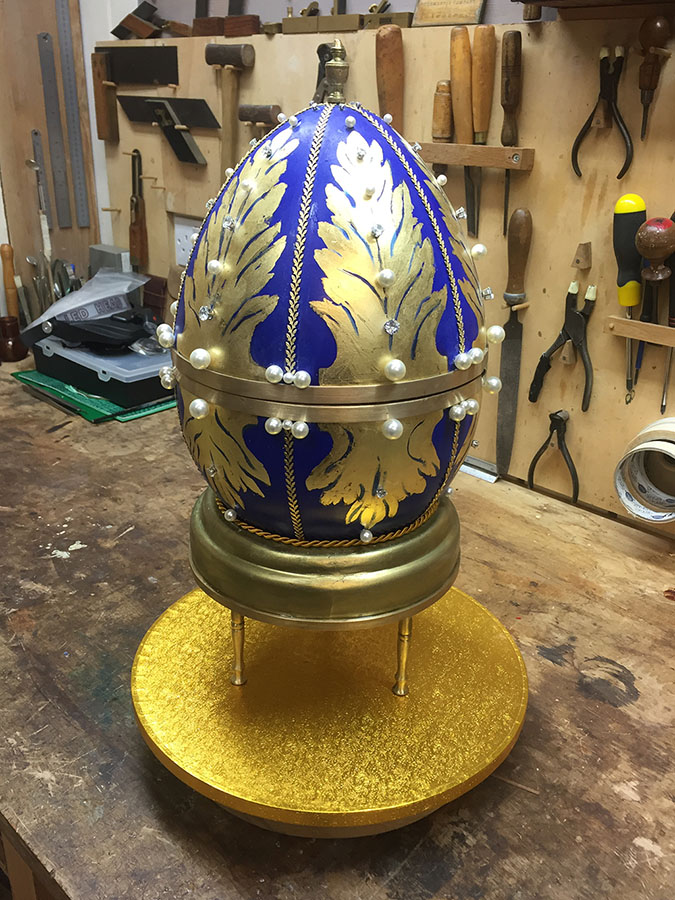 The end result was the pictured opulent #WyldeBlue and metallic gold, 48x pearl and gemstone  studded egg that would shortly open to hold a fabulous design by one clever art clubber from Widcombe Junior School. 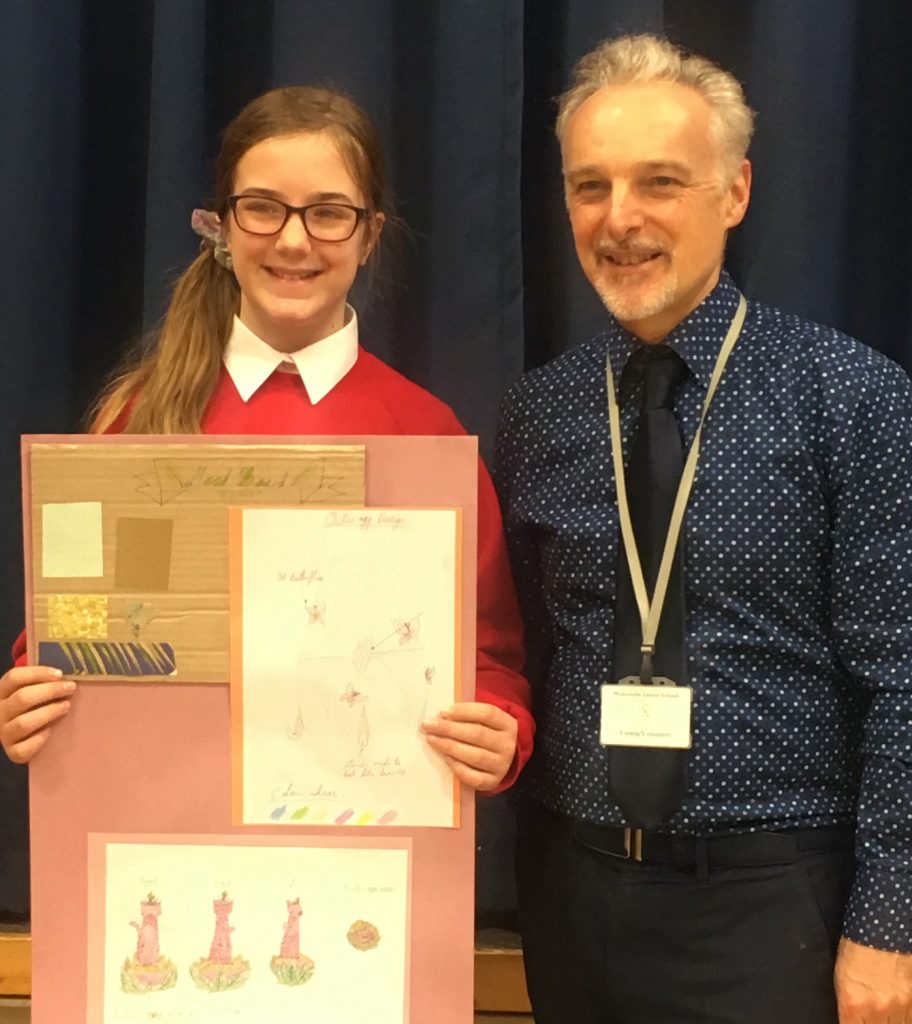 Nicholas returned to the school, with his Media Manager, Jane Knapp, and Anji from The Egg Theatre in tow, to judge the child’s design that he would adopt for inside the egg; but despite one winner being chosen, the entire art club would get to go to the Egg Theatre for a free show! 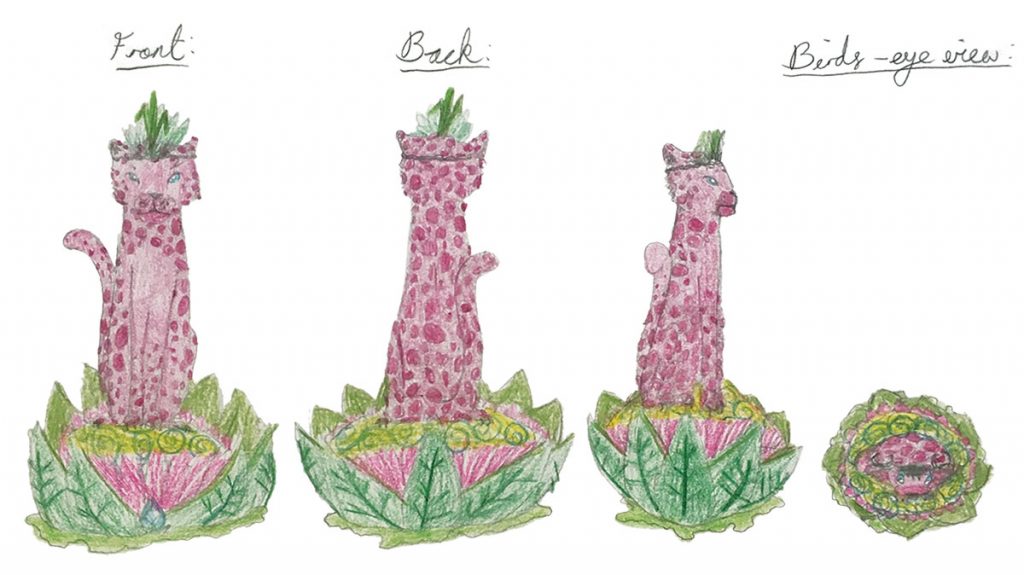 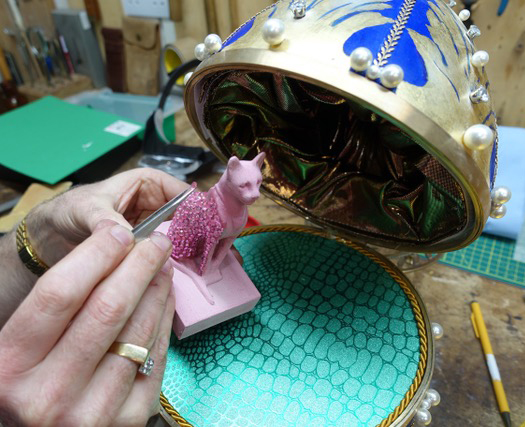 All the children’s designs were pinned up when they arrived, with their artists hovering nearby their beautiful coloured drawings, collages, and moodboards with palpable excitement and pride for Nicholas’comments. He praised each and every one with enthusiasm, and later said that it had been a genuinely very difficult decision,“all the designs were so creative and well thought out”. Our wonderful winner though was Belle! Embracing the Wild = Wylde brief, Belle designed a fabulous gemstone encrusted 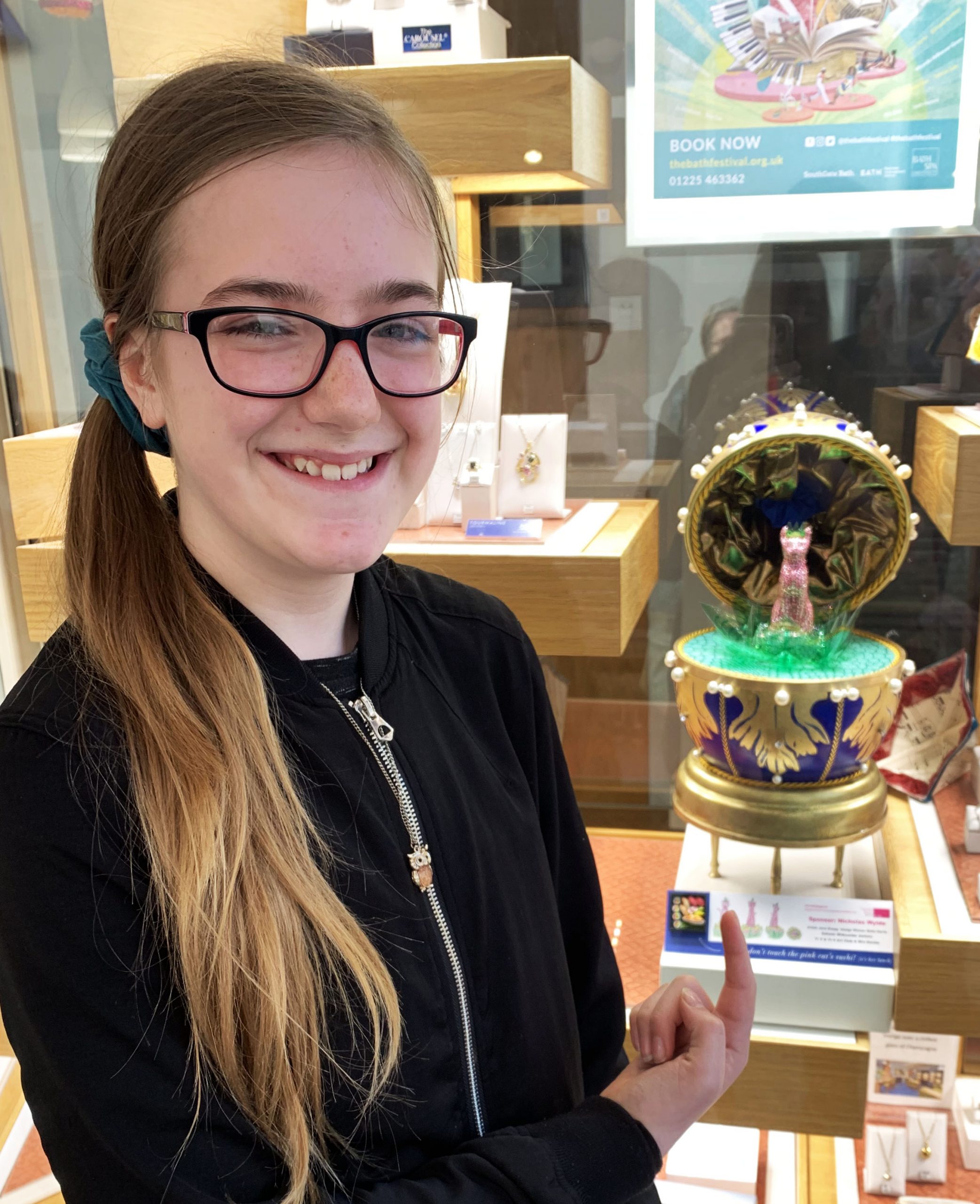 wild pink leopard surrounded by recycled plastic bottles for leaves, and a crown upon his head. She had also, very coincidently, suggested the colours Nicholas had already used for the outside of the egg in a swatch beside her design!

After our delighted winner had been selected, all that was left to do was for Nicholas to create her “Wylde-cat”. It took four hours to emblazon it with over 1000 pink gemstones, and of course a lot of patience! Soon after the whole thing, recycled bottles and all, were completed and on display inside the egg, it was in our Bath shop window for Belle and her parents to come by and see. She received the full 5-star Wylde Jeweller’s experience, while her parents sipped on champagne, and met with our Media Manager who learnt that she wanted to be an Artist or act at The Egg Theatre when she grew up – a happy coincidence, as she had grown up attending shows there! She was so so pleased to see her drawing come to life in the shop window next to all the fabulous Wylde jewellery, and we made sure to reward her with a nice big Lindt bunny. 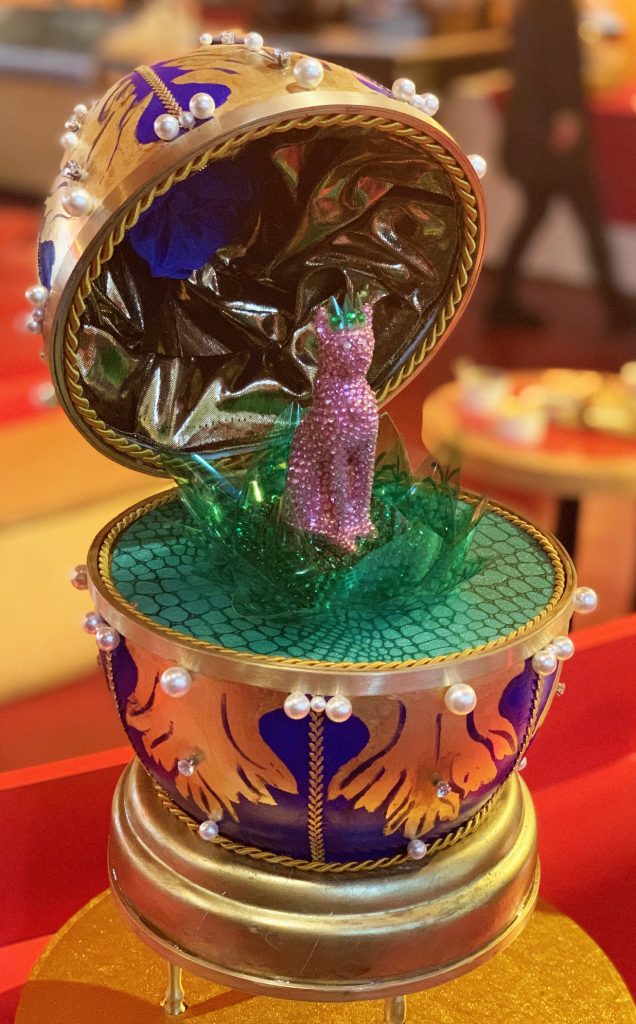 The entire ‘Eggsperience‘(!) was rounded off at The Egg Theatre’s egg hunt press night where all the egg’s creators from various businesses across Bath came together to show off their handiwork. Every egg in the room had it’s own charm, and it’s own unique design and ideas. Nicholas and Jane’s egg stood out beautifully, especially with it’s elegant design and the fact it’d been sawn in half! It’s creators expressed that their egg’s journey had been fantastic fun, despite a few pitfalls, and full of many rewarding moments.

All the eggs are pictured here below, but you’ll need to head to The Egg Theatre to find out where they all are now for The Great Big Egg Hunt 2019!! . Every egg has a secret question for you to answer too, for double the hunting fun. Click here to find out more, and if you miss this one, keep your eggs peeled for the hunt returning in 2020!

Nicholas Wylde Goldsmith Ltd would like to give special thanks to Anji Henderson of The Egg Theatre in Bath, local Artist Jane Knapp, Widcombe Junior School, and of course Belle for their invaluable help and skills in making our egg dreams come true. 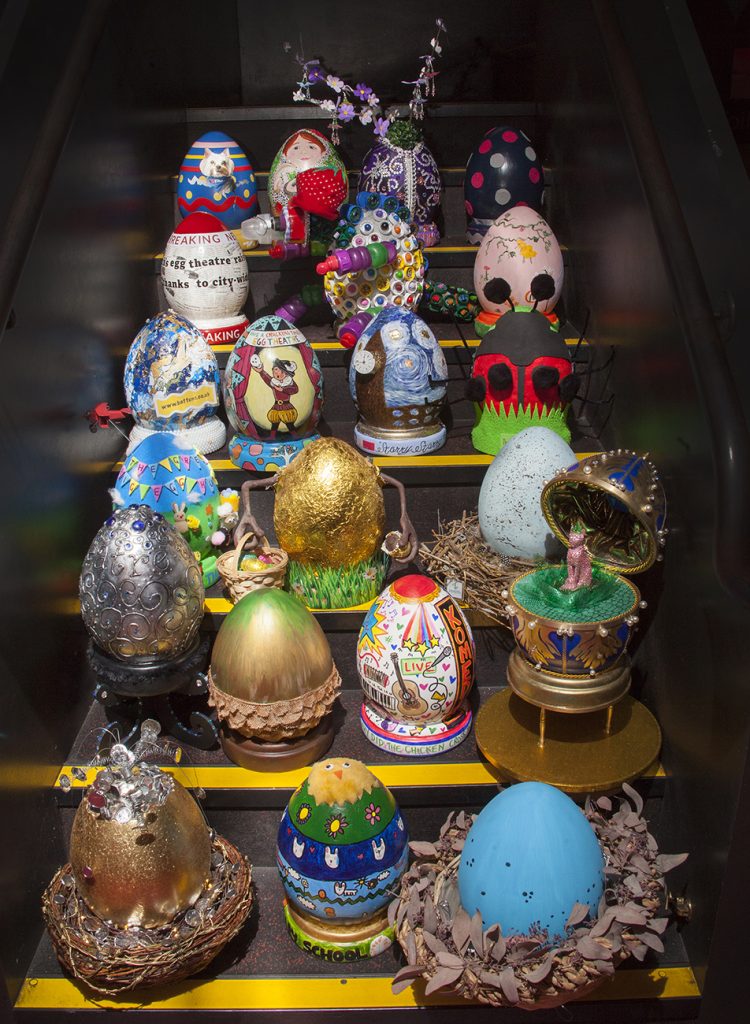 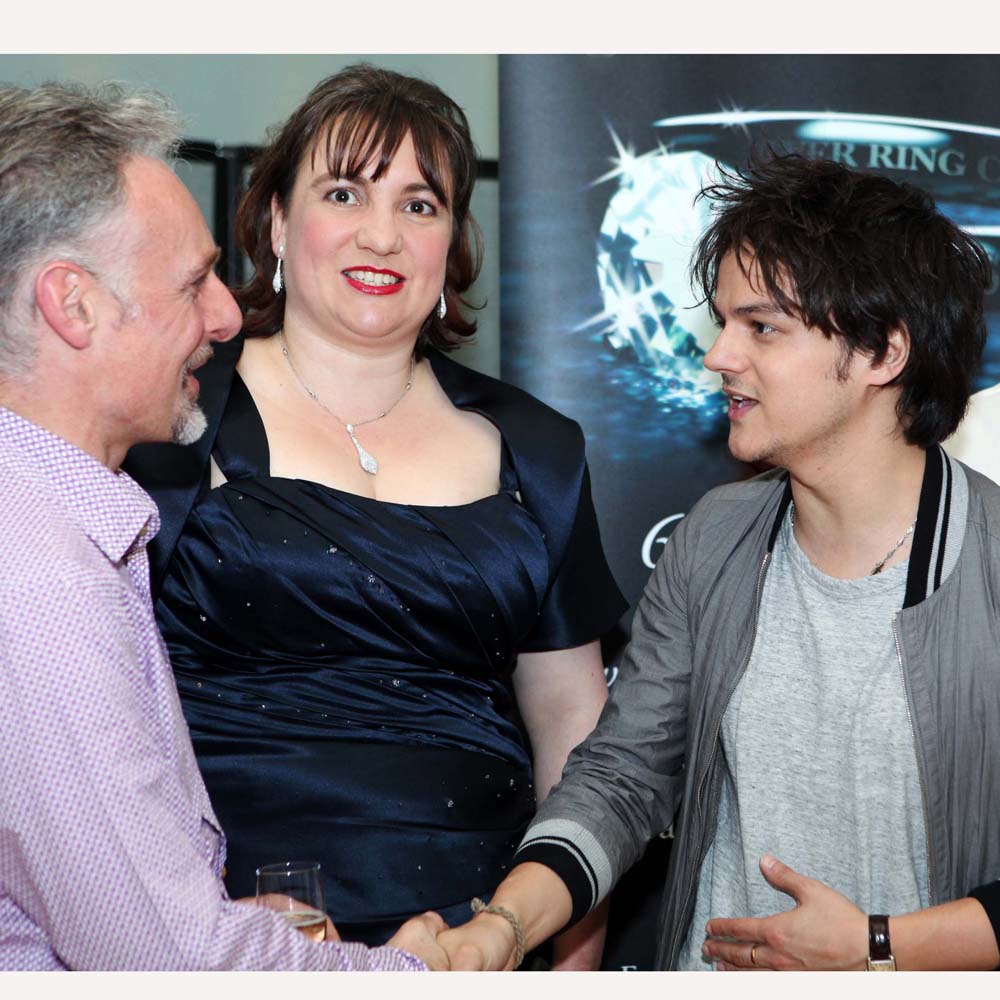 Jamie Cullum celebrates with the Silver Choir in Bath

Nicholas enjoys the celebrations and meets Jamie More than 1,000 people packed The Forum in Bath for a concert...

A competiton winner donates their prize

Nicholas was delighted to meet the request of one of his winning customer's in our Christmas competition. Instead of...

Nicholas has launched a specific version of his Spirit of Colour Collection designed with patriotic inspiration As...