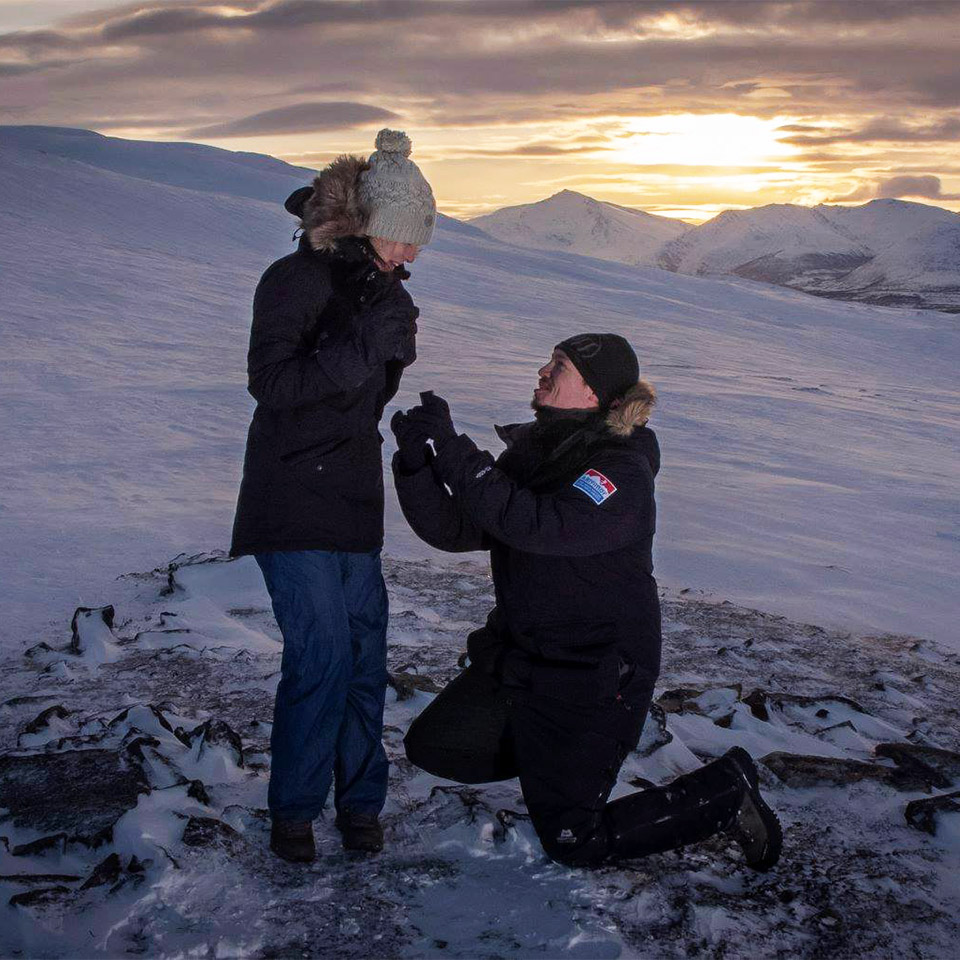 Josh recently visited our Bristol store to purchase an engagement ring for his girlfriend Helen that would mark the beginning of forever for this lovely couple! It would be one of the most romantic and beautiful proposals we’ve ever had the privilege of hearing about from a client, and we were so delighted when the husband-to-be wrote in with the full story. Here he describes the surprise journey, and proposal, in his own words:

“Both Helen and I work in documentary (Helen as a researcher and production manager, and I as a cameraman), and are both outdoorsy people, with a love of wildlife and the natural world. I knew Helen had a big birthday coming up the following year so I asked her to make sure to keep herself free on the week leading up to it as I wanted to take her on a short getaway for the big day. I didn’t tell her where we were going but as the date grew closer I hinted that it was possibly going to be quite cold and that she will want to pack warm clothes for the trip.

Finally the day arrived and we travelled to the airport, Helen still didn’t know where we were going, but as we arrived at the check-in counter, there wasn’t much I could do to hide that we were flying to Norway. Several hours later we arrived in Tromso, over 200 miles into the arctic circle, and during a full on blizzard. Our cab made its way to our AirBnB and we waded through thick snow to get to the door. The snow on the balcony garden had piled up several feet against the sliding doors, and out through the windows, in the evening light, clouded by the heavy snowfall was the channel, and beyond that, the picturesque Storsteinen plateau mountain. Looking at the forecast, we decided (with some gentle persuasion from me) that the following morning would be the perfect time to head up there.Working perfectly with my plan, on the flight over, Helen had said she wanted us to get some nice photos together as we rarely get any of ourselves. On the way up to Storsteinen plateau the following morning, I said there’s a couple of photos I’d really like to try that I think would be lovely. We got to the top and began making our way along the ridge of the mountain, the ground formed of snow and ice and an ice particle mist blowing around our ankles. The beautiful city of Tromso twinkled in the already dwindling light below us and beyond that, snow capped mountains as far as the eye could see in every direction. We carried on along the mountain, enjoying the sights, and stopping occasionally for the odd photo. I kept saying there was a spot a little further up that I thought would be really nice for a photo of us and we continued on as the short arctic daylight was drawing to a close.

Finally I saw it, the perfect spot. A raised section of rock, shielding us from view of the main rout others were walking, and on the other side, a spectacular view of the mountains beyond. I set up my camera on a tripod and a couple of remotely triggered flash guns on the ground, framed up the photo on Helen, set the timer and walked on into shot. 10, 9, 8, 7 6… I counted down in my head. I’d practiced the timing of this moment over and over again in the garden at home. This first time I let it count all the way down to 1, taking a lovely picture of the two of us with the arctic sunset behind us. Checking the camera and making sure the photo had come out well (it had), I told Helen I just wanted to change one setting and take it again. Patiently she agreed (It really was cold up there, around -16c at this point). Again, I set the timer going and joined Helen in the shot. 10, 9, 8, 7, 6, (this is it, I thought), 5, (down on one knee), 4, 3, (Lift up the box and open the lid), 2, (I say the words I’ve been waiting to say for a year), 1…
Helen looked down, the camera sprang into life, and moments later, we were engaged!
That evening we spent several hours out in the arctic bush under intense northern lights which rounded up the happiest day of our lives, so far…” 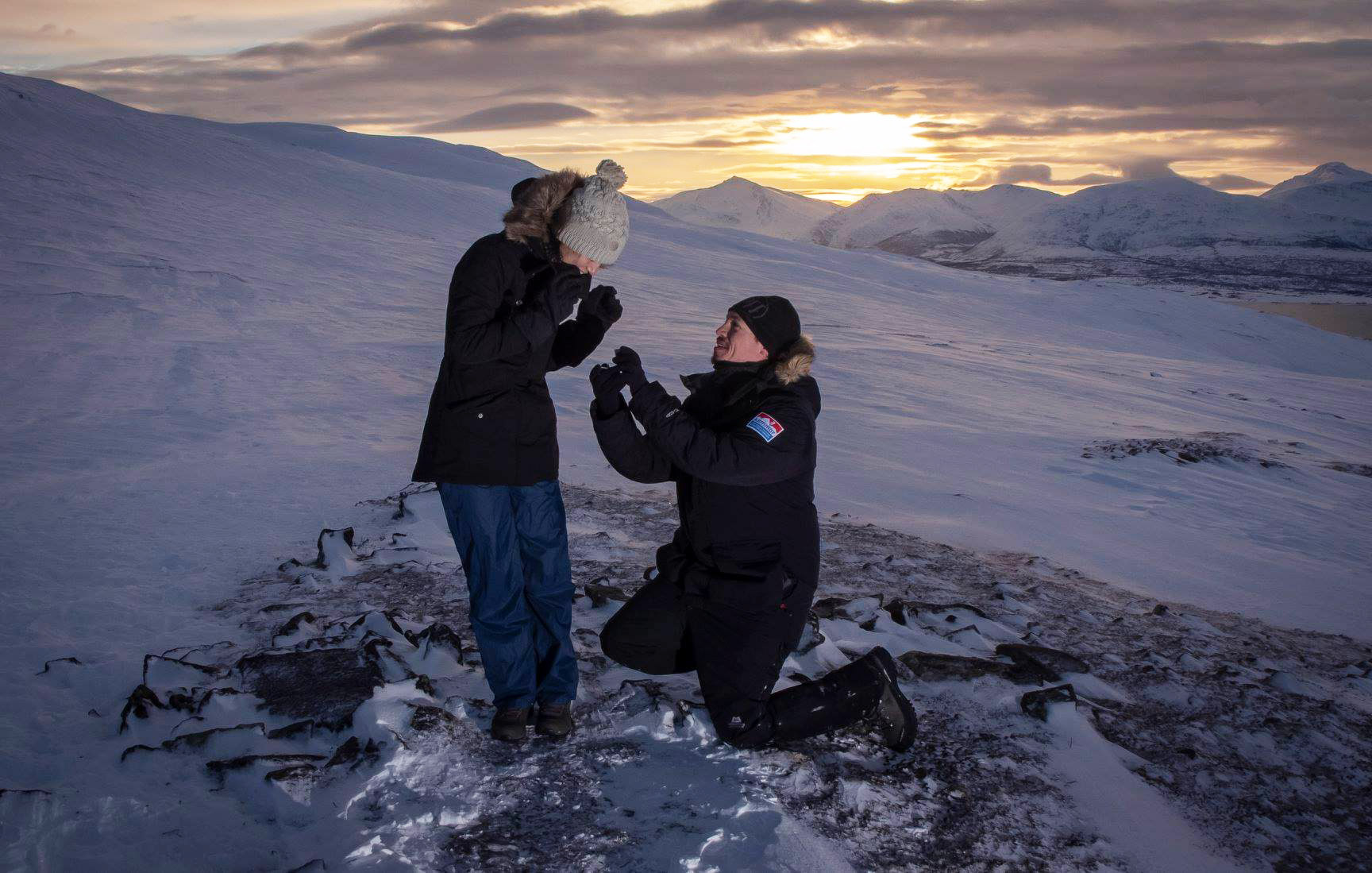 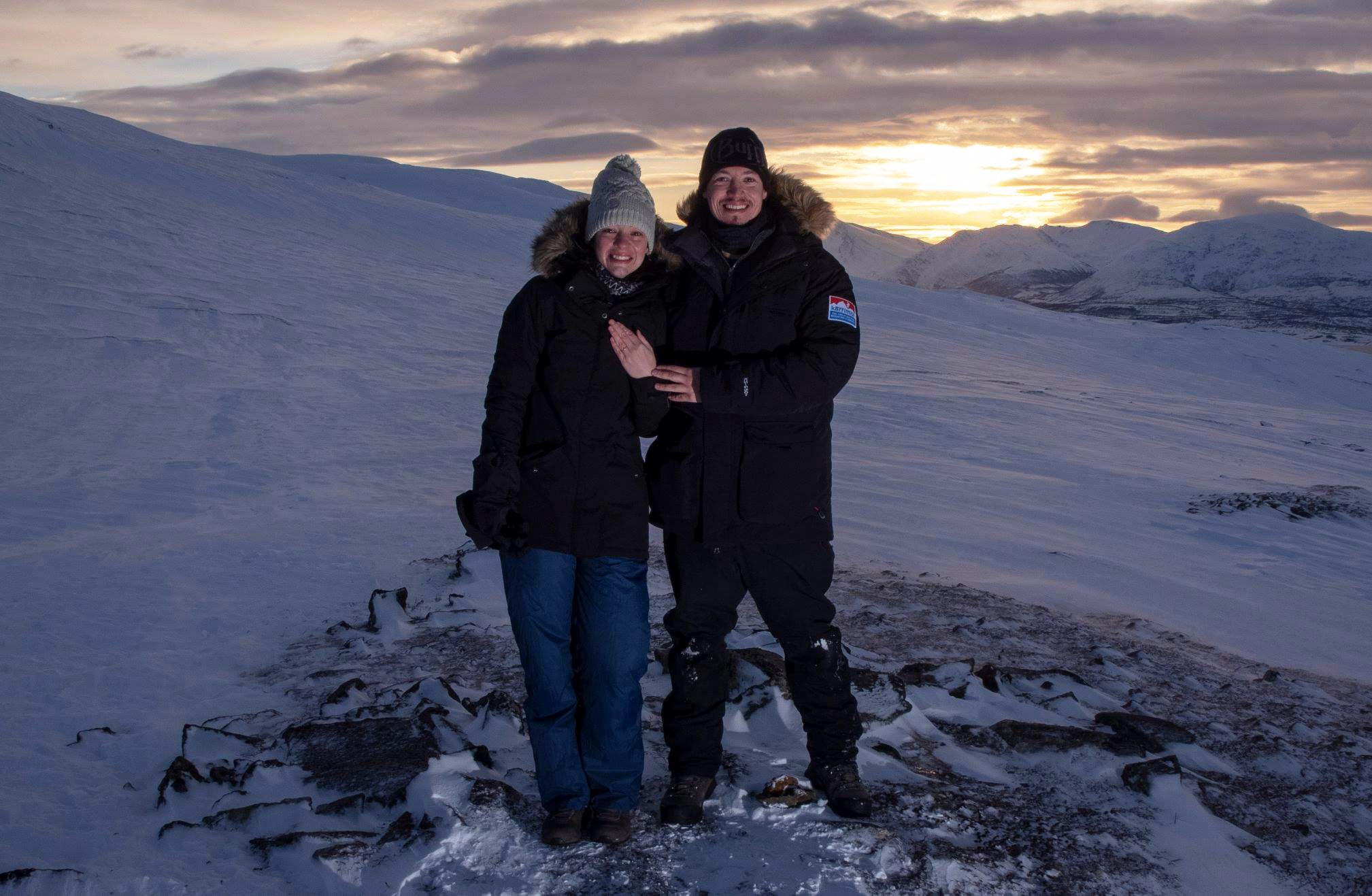 The ring: “When I first decided that I was going to propose to Helen, it was almost a year before the actual proposal, and I was high up in the arctic in Greenland. I contacted Shetal at Nicholas Wylde to see if it would be possible to have a custom ring made up. I was very impressed with how friendly and helpful Shetal and everyone else at NW was. We spoke back and forth both in emails and in person for months working on the designs. We decided on an amazing ring design which I loved, and luckily so does Helen, who has said several times since the proposal, that it’s perfect. The design and cut of the ring and diamond is beautiful, and again, the service has been nothing but a pleasure!”

We are so happy to have been some small part of Helen and Josh’s journey into the next phase of their lives together. We wish them the most wonderful of marriages together, and hope that these gorgeous photos mark the beginning of many more romantic opportunities to be surrounded by beautiful scenery.

Congratulations from the whole Wylde team! 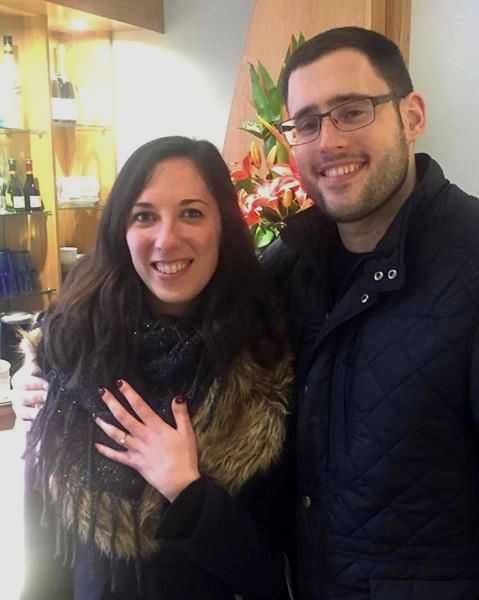 It's our 30th year celebration and what better way to begin the new year than with a romantic story and another couple...

We recently had the honour to provide an engagement ring for an incredibly joyful and public proposal that would take... 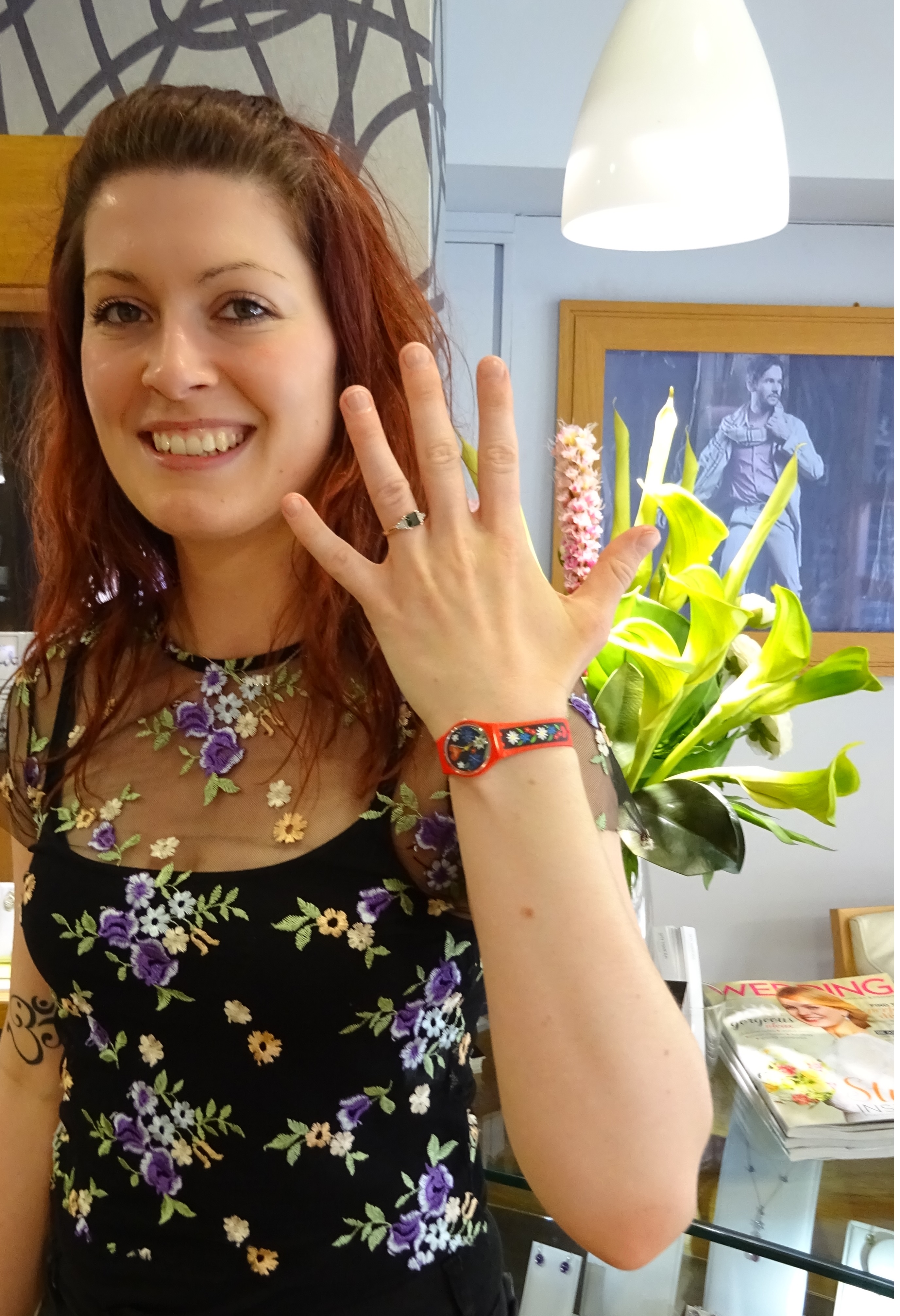 Here's some kind words from another happy client who experienced the 'Wylde Effect' from our Clifton store - recently...